Know About Which Type Of Lock Is Good For Your House 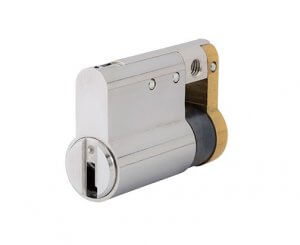 The entrance door is the place of the house where there are more robbery attempts. But statistics say that within a few minutes the thief has not been able to force it, he gives up. That is why it is so important to choose a good lock for the access door to your home.

Other places in your house that will require a lock are the garage door, the storage room, the outside gate or the gate, but also some windows.

Before telling you what types of lock you can find, it is essential that you know their parts, to familiarize yourself with the names. Some locks are sold with all the items that we show you, but, in general, you should buy some separately.

1. Latch Or Slip: The handle operates it: it is inserted into the lock case when the handle is lowered. He is responsible for keeping the door closed when the key is not locked. It has a straight face and an angled face, which is the one that “slips” to allow the door to close.
2. Nut: It houses the square (rod with straight sides) where the handle is inserted from one of the faces of the door.
3. Housing For The Cylinder: This is usually purchased separately, always taking into account the dimensions of the lock and the profile it requires.
4. Shield: It is a piece that is located on the outside of the door, surrounding the mouth of the bowler hat. Its function, in addition to aesthetics, is to reinforce safety: with it is avoided that attempts are made to remove the cylinder. It is usually purchased separately.
5. Keyhole: Decorative piece that is placed inside the door over the cylinder. It is purchased separately and placed with the screws included in the manufacturer.
6. Security Bolts: Depending on the type of lock, it will take more closures or less.
7. Cylinder Or Bowler: Although some manufacturers include it with their locks, it is usual to buy it separately, since there are them with different degrees of security, as they include different protections against the force. Profile Cylinder Locks must always be the same width of the door and must have the cam (the piece that rises with the movement of the key) centered or offset, depending on the characteristics of the lock.
8. Bolt Fixing Bolt: It is placed on the edge of the door and must be of sufficient length to pass through part of the lock and screw the cylinder.
9. Keys: They always come with the cylinder you buy. The manufacturer includes a minimum of three, but it is usual to offer five. They can be teeth, dots, or vanes. There are keys with different degrees of security, unenforceable, trainable, etc.
10. Screws: For the placement of the lock, as of the lock. It must be the same tone as these elements.

It is screwed on the inside of the door, and its strike is also screwed to the outside of the frame. They are perfect when you want to change an old recessed lock, and you don’t find a model that fits in the hole or without much altering the door. They can be square and use a handle to open the latch or actuate it with a side hook or a turn button. The surface locks can be:

1. Simple: In addition to the latch, they carry a single closure in the form of a flask, which is usually operated with a turn of the key.
2. Multicierre: Under the latch, they have several bolt-shaped side locks, usually between three and five, which are operated with several turns of the key.
3. Multipoint: They allow several closing points in different places of the door. Generally, one upper and one lower, in the form of a bar that crosses the lock and one or three lateral points, towards the frame, which can be of several bolt-shaped or flask-shaped closures.

So for the security of your place, it is a good idea to choose the best lock as per the requirement.